Want to know more?  Access the proven, best practices research, or give me a call 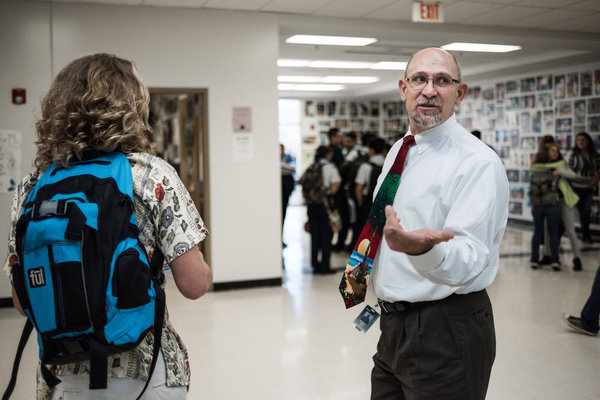 The principal of Berea, Mike Noel, in the halls before lunch. Administrators at the school are proud of the rising graduation rate. Credit Sean Rayford for The New York Times

“Quite honestly, it had become very easy, and it didn’t mean a lot,” said Molly Spearman, the state superintendent of education.

Last year, the legislature required all 11th graders to take a test assessing college and career readiness, as well as an exam that measured academic skills needed for most jobs.

The first results, from the ACT college admissions tests, showed that only about a quarter of students statewide were ready for either college-level math or reading. Just 6 percent of black students and 15 percent of Hispanic students scored ready for college in math, with only slightly higher rates for reading. In one poor rural district where most of the students are African-American, graduation rates have risen to more than 85 percent, yet not one student scored high enough on the ACT to be deemed ready for college in reading or math.

Even on simpler tests of the cognitive skills needed for many jobs, fewer than two-thirds of South Carolina 11th graders could show sufficient skills in both math and reading.

Here at Berea High School, a rare, racially integrated campus with similar numbers of African-American, Hispanic and white students, administrators are proud of the rising graduation rate. Addressing the low scores on the ACT, administrators said many 11th graders had not yet learned the material covered when they took the test. And some educators say such tests do not accurately predict whether students will do well in college or in the workplace anyway.

Imari Nicholson, a 17-year-old student at Berea, has expressed interest in sports therapy or dentistry. After he failed chemistry his junior year, his counselor reminded him that he would need the course to qualify for a college program in his chosen fields.

He is retaking it this semester. This time, he is getting an A.

But he said he was not satisfied with his scores on the ACT, which indicated that he was not yet ready for college. “I expect better of myself,” he said.