Learning: How to Integrate Future Learning Into Your Organization

In a world of evidence-based research, everything is about data. Unfortunately, there is no data about the future.

The forward-looking technique of scenario planning rests on the premise that the future is uncertain, and that any and all plans balance between a number of forces that pull and tug at them like a ship at sea. Although an organization can navigate through the treacherous waters of the future, it often encounters forces over which it has little or no control. Those forces may invalidate its assumptions about the future or, at minimum, force them to be re-evaluated.

Understanding the future’s driving forces is a learning process for an organization, as is the learning that comes through strategic dialog and the ability to test ideas under different circumstances.

Scenario planning begins by exploring the driving forces for a business, going broadly beyond those areas where an individual organization has influence. The state of globalization, for instance, would be a typical factor for almost all businesses in the current climate.

Once the factors are gathered, those that are more certain (like population growth) are analyzed, and those that are critical, but uncertain, are named and ranked. This creates a set of critical uncertainties that will drive the creation of a scenario matrix, as well as the major characters in the scenario narratives.

Scenario planners perform a bit of intuitive magic, laying uncertainty over uncertainty until they create a matrix, that (for lack of a better metaphor) offers the largest canvas for diverse but relevant storytelling.

A typical scenario planning effort generates three to five scenarios, with the “industrial method” generating a two-by- two matrix from the intersection of two uncertainties.

The process guides development of narratives, and the logics, that populate the quadrants. Many techniques, from plotting future news stories to developing characters who live through the scenarios, are used to generated deep, rich stories about plausible futures. No magic or violation of physics is allowed. Story developers must ground their futures in what exists today; they are free, however, to speculate about the interactions among the various forces shaping an industry. And that is where the first real learning opportunity presents itself:

There is no right answer to how the future will unfold. Because of this, many things are possible that data might not support, or where perspectives on data are filtered through biases and the “cult of knowledge” (when people are so close to an issue that they cannot see the forest for the trees, so they discount data that doesn’t agree with their biases).

By capturing uncertainties and putting a name on them, people are confronted by what their colleagues admit that they don’t know. And when the list gets long, it becomes pretty clear, not only that a wealth of uncertainty exists about the future, but that the interactions of all of those uncertainties create their own uncertainties.

Strategic dialog is the process of converging on the implications for these uncertainties against the backdrop of the scenarios. If we don’t know what the future will be, then any variable could have an infinite number of possible outcomes. If, however, we use the logic of the driving forces to narrow the band of possible outcomes, then we can discuss how a divergent or even conflicting range of possibilities would affect the organization.

Strategic dialog helps an organization ruminate about how it will act under different circumstances. At the heart of strategy though, is differentiation; strategic dialog also helps organizations consider how they will remain differentiated from competition under different social, economic, technological, environmental and political circumstances. Strategic dialog is not about aimless wandering but purposeful conversation that leads to a strategic position, be it a position in a market, a new product or service offering, or a new process.

If scenarios become a regular part of an organizational tool kit, they can prove to be a powerful platform for learning.

At the highest level, they help an organization learn about its frailties by developing a consensus about those areas where it feels powerless to control its own destiny. In light of that, strategic dialog helps an organization converge on ways to navigate under different circumstances, thus transforming perceived weakness into competitive strength.

The act of creating narratives is another learning opportunity for an organization. The creation of narratives for each future helps an organization begin to practice futures that might unfold. It uses strategic dialog to describe the how and why of certain plot twists: why a particular piece of legislation passes, why a competitor merges, how a regional conflict affects the supply chain. These areas, and many more, often fail to make the day-to-day litany of status data that a company tracks. If there is no regional conflict, it has no bearing on execution, so no one wastes time thinking about it. Scenarios help organizations prepare for the future by describing the circumstance that lead to that regional conflict, and then forces planners, executives and managers to consider their actions in light of such an event. People are forced to think about areas they would otherwise discount.

This is very different than worst-case scenarios or contingency planning, because unlike those practices, scenario planning has no single trigger for its future state. It is rather an amalgam of forces that play out together to create a future state. This makes them a much richer tool for speculative planning and a way to imagine multiple or even simultaneous contingencies. Because of the work done on uncertainties, scenarios help pinpoint the set of events that might lead to a future state, and that leads to the next learning opportunity: tracking and early warning signals.

Scenarios have played important roles in organizations as a strategic planning tool and nothing else. They have done their duty and been discarded at the end of a meeting, never to be seen again. They are most effective, however, as a tool for continuous learning. As events unfold, those events can be seen as evidence for how the future may unfold. More data about one future than the other may indicate a propensity for the future to unfold in a certain way.

Health-care organizations have been living under the specter of uncertainty for some time. They have regulatory issues as well as scientific and social issues that impinge on their ability to plan effectively under certainty. If they watch legislation closely, they will see, early in the next term, if the forces that want to repeal the nascent health reform movement have momentum or not. For health care, a future without a health-care bill is a very different future than that with a fully enacted health-care bill. The signals are legislative action, the effectiveness of Tea Party candidates, polling numbers, court actions and myriad other things that will ultimately seal the fate of health care, but today can act as early warning signals of the outcome.

Scenarios also help build a sense memory for these various futures. If people believe they know what the future will be, they will be best prepared for that future—perhaps less agile in the face of change than those who are open to multiple futures. By creating multiple plausible futures, individuals can, like models in a wind tunnel, simulate the effects of various actions under controlled circumstances, thus learning how they, and how their organization, will react if a particular future doesn’t play out. This simulation approach helps organizations learn how to adapt.

Scenarios, however, don’t stop at practicing the imaginable; they help challenge bias regularly when they are seen as a framework for challenging assumptions and generating emergent ideas. 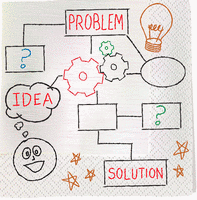 Outside of my office at Microsoft I kept a corkboard that moved with me from place-to-place during frequent reshuffles of buildings and teams. It acted as a visceral reminder that the future was unfolding in multiple directions at the same time. When someone came to me with an idea, I could quickly ask them to select the future in which that product would do best. We could then consider their assumption in light of that future. All of the time we are talking, the board is not just an image of a future state, but a hodgepodge of news stories, advertisements, blog postings and newspaper clips that describe real-world actions that point toward each of the four scenarios. If the person I’m talking with doesn’t discover it quickly, within 30 minutes I point out that their assumptions about the future have discounted seventyfive percent of the data on the corkboard.

If we flip this around, and come to the scenarios with a question, they prove equally adept as tools of emergent discovery. The vision of collaboration that each scenario helps fashion can provide input to the designer that would not come from a customer-focused exercise, regardless of the number of customers queried. The very act of creating divergent narratives produces pathways of causality that don’t exist without the stories. The multi-variable interactions, between people, governance models, technology, security, reputation and other factors contribute to the answer that a scenario generates. Collaboration design may become more flexible and resilient if the designer understands that the software must work under a variety of circumstances, not just the one or two initially presumed.

Scenario planning does not require technology to be successful, but like many processes, it can benefit from technology to improve record keeping, facilitate dialog and analyze results. Scenarios should also grow over time to reflect current circumstances, so they should include a way to suggest new uncertainties.

I personally turned my well-traveled corkboard into a virtual version so that others could watch the future unfold without visiting the corridor outside of my office. This was done with SharePoint as well. Each file included its placement among the scenarios, its origins and a copy of the article in XPS format. A graphical interface presented an overview of the scenarios along with a narrative summary. Clicking on a particular scenario revealed a list of articles, sorted in ascending date order, that demonstrated a pathway from the time the scenarios were written, to the current moment. People could watch the future unfold before them.

These techniques need not be limited to proprietary software. Wikis and blogs have also been used to store scenarios, document and facilitate strategic dialog and track uncertainties. Strategic dialog is a collaborative process that makes collaboration software an important complement for continuing face-to-face discussions and connecting with team members either physically or temporally distant.

For collaboration technology to work best, the team must commit to the tool and not retreat to e-mail as a way to conduct the dialog. Strategic dialog and scenarios, in particular, are best when the context is readily available. E-mail loses context too quickly, and it can often misplace team members and information as it flits around an organization. Committing to a central repository is essential.

The accompanying table includes a column that lists the best technology for supporting each phase of the scenario development process (See Figure 1).

Strategic plans suffer from being plans. A plan is something that is meant to be executed, to be followed, to be adhered to. Scenarios and strategic dialog, foster a conversation about direction. They inform current action in light of uncertainty. Scenarios offer a powerful tool for the imagination aimed at executives and senior managers. Learning organizations recognize that learning needs structure, and when the learning is about the future, scenarios offer a well test structure for facilitating strategic dialog, challenging assumptions and discovering emergent opportunities.

—The author is a strategist, writer, speaker and futurist. Read more about him at danielwrasmus.com.