Learning: The Problem with Lecturing is that very Little Learning Occurs

Learning: By Emily Hanford, Via americanradioworks.publicradio.org

Learning: “The introductory classes only seem to be really working for about 10 percent of the students. These are the 10 percent who would learn it even without the instructor.” -David Hestenes

Back in the late 1970s a colleague came to David Hestenes with a problem.

The two of them were physics professors at Arizona State University. Hestenes was teaching mostly graduate students, but his colleague was teaching introductory physics, and the students in his classes were not doing well. Semester after semester, the class average on his exams never got above about 40 percent.

“And I noted that the reason for that was that his examination questions were mostly qualitative, requiring understanding of the concepts,” says Hestenes.

Most professors didn’t test for this kind of understanding; students just had to solve problems to pass the exams.

This observation prompted a series of conversations between Hestenes and his colleague about the difference between being able to solve problems and really understanding the concepts behind those problems. They had a sneaking suspicion students were just learning the problem-solving part and never really getting the concepts.

Hestenes and one of his graduate students, Ibrahim Halloun, decided to test this theory by coming up with a way to probe students’ conceptual understanding of physics.

They developed a multiple-choice test, now known as the Force Concept Inventory, or FCI. Here is the first and probably easiest question on that test:

Two metal balls are the same size but one weighs twice as much as the other. The balls are dropped from the roof of a two-story building at the same instant. The time it takes the balls to reach the ground will be

This is a fundamental concept in physics but even some people who have taken physics courses get this question wrong. The correct answer is not what intuition suggests (we’ll get to the right answer in a minute).

Hestenes and Halloun gave their test to about 1000 students in introductory physics courses taught by seven different instructors at two different schools.

Each class was taught in a traditional lecture mode, though the instructors had different styles. One did a lot of elaborate demonstrations. One emphasized problem-solving. Another was a theoretical physicist who devoted a lot of time to talking about the conceptual structure of physics.

Students in these seven different classes took the test at the beginning of the semester. Perhaps not surprisingly, they didn’t do very well (though many of them had already taken high school physics; Hestenes and Halloun expected them to do better).

The students took the test again at the end of the semester. And they still didn’t do very well. Their scores went up by

The results were published in a series of articles in the American Journal of Physics in 1985.

Hestenes says the editor of the American Journal of Physics was fascinated by the findings, but there was not a lot of immediate interest from his fellow physics professors.

Even the ones who’d participated in the experiment “didn’t pay any attention” to the results, says Hestenes. “One reason may be that they really didn’t know what to do.”

Lecturing was the way just about everyone taught introductory physics. To think there was something wrong with the lecture meant physics instructors would “have to really change the way they do things,” says Hestenes.

A lot of them ignored his study and kept teaching the way they always had. They insisted their lectures were working just fine.

Taking It to Heart

But Eric Mazur was unusual, says Hestenes. “He was the first one who took it to heart.”

Mazur is a physics professor at Harvard University. He came across Hestenes’s articles in 1990, five years after they’d been published.

To understand why the articles had such a big impact on Mazur you have to know some things about his history.

Mazur grew up dreaming of becoming an astronomer.

“When I was five years old I fell in love with the universe,” he says. “I tried to get my hands on to every accessible book on astronomy. I was so excited by the world of science.”

But when Mazur got to university, he hated the astronomy classes.

“It was all sitting in the lecture, and then scribbling down notes and cramming those notes and parroting them back on 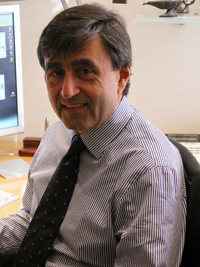 the exam,” he says. “Focusing on the details, focusing on memorizing and regurgitation, the whole beauty of astronomy was lost.”

So he switched to physics. It wasn’t as heartbreaking for him to sit in a physics lecture and memorize things.

Mazur eventually got a Ph.D. in physics and a job at Harvard University. Like most Ph.D.s, Mazur never got any training in how to teach.

“I just mimicked what my instructors had done to me. I think that’s what we all do. So, I lectured.”

Turns out he loved lecturing. It’s a lot more fun being on stage delivering a lecture than it is sitting in the audience watching. And that’s exactly what a lecture is, says Mazur: a performance. He decided to make it fun.

“Thanks to the setup we have here at Harvard, it was very flashy, like a Hollywood show,” he says. “Attention-grabbing demos, me shooting through the lecture hall in a rocket car.”

Mazur’s students apparently loved it. His classes were full and he got great evaluations from the students at the end of every semester.

“For a long while, I thought I was doing a really, really good job,” he says.

Then Mazur read the articles by Hestenes and Halloun. Mazur’s first instinct was to dismiss the results. The test covered such basic material; he was sure his students were learning this stuff.

But what if they weren’t? How boring it would be to learn physics and never really understand the fundamental concepts that make physics so fascinating. Mazur thought back to his own experience with astronomy; if his students were just memorizing information and solving problems, he had to know, and he had to do something about it.

So he gave them the FCI, and he was shocked.

“They didn’t do much better,” he says. “In fact, when they looked at the test that I gave to them some students asked me, ‘How should I answer these questions? According to what you taught me, or according to the way I usually think about these things?’ That’s when it started to dawn on me that something was really amiss.”

What Mazur and other physicists have come to understand is that one reason it’s hard for students to learn physics is that they come into class with a very strong set of intuitive beliefs about how the physical world works.

But it turns out that many of these intuitive notions do not square with what physicists have discovered about how things actually work.

Most people’s intuition tells them if you drop two balls of different weights from the second story of a building, the heavier ball will reach the ground first.

But it doesn’t. The answer to the question above is #3: The balls reach the ground at the same time.

This is a very difficult concept for most students to understand because they already have a concept in their mind that’s in conflict with this new concept.

“Once you understand physics you can connect those two concepts and you can see everything as part of a coherent set of laws and framework of laws,” says Mazur.

But according to the results of the Force Concept Inventory test, which has now been given to tens of thousands of students around the world, most people who take conventional lecture-based courses don’t end up with a good understanding of the fundamental concepts of physics.

“I think what many students in their introductory physics courses do is they retain their intuitive notions,” says Mazur. They memorize what the professor tells them and “parrot it back” on the exam but they never really connect what they are learning to what they already think about how the physical world works.

The way he really learned physics was to teach himself.

“I am what I am not because of my education but probably in spite of it,” he says.

“They Learn It on Their Own.”

David Hestenes says this is true for a lot of students.

“If you look at what’s happening in the introductory classes, even at the best schools, the classes only seem to be really working for about 10 percent of the students,” he says. “And I think all the evidence indicates that these 10 percent are the 10 percent of students that would learn it even without the instructor. They essentially learn it on their own.”

A whole field of education research has emerged from what physicists have learned about the problems with the traditional lecture. There are now Physics Education Research groups at dozens of universities and a long list of peer-reviewed studies that confirm what they have found. It’s not just physics where lectures fail; the traditional lecture is not an effective way to teach any subject.

“Students have to be active in developing their knowledge,” says Hestenes. “They can’t passively assimilate it.”

The idea that people learn better when they’re actively engaged is one of the central findings from an explosion of cognitive research conducted over the last several decades.

“Students come to the classroom with preconceptions about how the world works,” according to a major report by the National Research Council. “If their initial understanding is not engaged, they may fail to grasp the new concepts and information that are taught, or they may learn for the purposes of a test but revert to their preconceptions outside the classroom.”

Researchers and instructors have developed a number of “interactive-engagement” techniques in recent years that have proven more effective than lectures for teaching large classes. Mazur uses an approach that he calls “peer instruction.” It’s hard to know how many instructors are using these approaches, but experts say most large, introductory classes – especially in the sciences – are still taught using the conventional lecture method.

Mazur says even now, years after the first articles about the FCI and the establishment of dozens of Physics Education Research programs, a lot of professors still have a hard time getting their heads around the idea that there is anything wrong with lecturing.

“Most of the people who are teaching are products of this approach to teaching,” he says. “They were successful in this approach.”

He says they are the ones, like him, who taught themselves, because they were interested and motivated to learn. But Mazur says professors need to do better, because the economy is changing; more people need to succeed in college now.

Mazur believes the challenge for educators in the 21st century is to find new ways to reach more students, and to help them learn better than they ever have before.